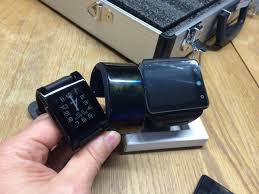 Sure, the idea sounded downright radical: Instead of a smartphone streaming to devices like a smart watch, the Neptune Hub and Pocket were created with the opposite relationship in mind. There was Hub, a smartwatch powerful enough to run apps, take calls, and send messages. And there was Pocket, a relatively dumb screen that fit in your pocket, like a smartphone, but was little more than an input device. Many people didn't get it. "Most of the negativity was from people that don't see this as a first start," says Simon Tian, Neptune's 20-year-old founder. "They thought we were just going to stop at the pocket screen."

It isn't. Today, Neptune launches what it calls Suite, a group of devices to augment Hub. There's the Tab, a tablet with an attachable keyboard. There's also a dongle that will stream to your TV, and wireless earbuds you can wear around your neck, and which cleverly doubles as a charging cord. It's all selling for the price originally announced for the Hub and Pocket: $899 at retail, or a couple hundred less if you pre-order via Neptune's Indiegogo campaign.