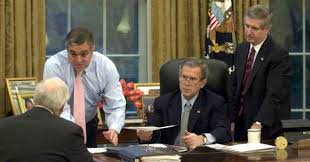 CIA "analyst" Frederick Fleitz took the instructions quite literally, bragging about being allowed to serve, simultaneously, "two bosses" — and becoming Bolton's "enforcer." Fleitz famously chided a senior intelligence analyst at State for not understanding that it was the prerogative of policymakers like Bolton – not intelligence analysts – to "interpret" intelligence data.

In an email from Fleitz in early 2002, at the time when one of his bosses, the pliable George Tenet, was "fixing" the intelligence to "justify" war on Iraq, Fleitz outlined the remarkable new intelligence ethos imposed by President George W. Bush, Vice President Dick Cheney and their subordinates who were reshaping the U.S. Intelligence Community.