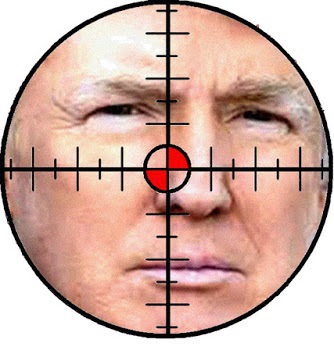 There is credible information that an incident could occur during ASEAN," says Special Agent Gibson, leading the Secret Service's personnel brief in Manila. Pointing to a map of ISIS and ISIS-affiliated threat actors, she adds, "As of this week, the Philippines has escalated to a critical threat level." (Days before the president's visit, ISIS issued a series of threats—via video—that featured a picture of the president filled with bullets, and a message urging jihadists to "lie in wait" and "ambush" POTUS in the Philippines.)

Prior to President Trump's arrival on Air Force One, a PID agent informs Special Agent Gibson that he's come across a credible threat against POTUS—in the form of a tweet reading, "Gonna be in Manila the same time as Trump… I'll take one for the team lads," accompanied by a mugshot of Lee Harvey Oswald. And on his Instagram, they find a photo of the male suspect wielding a copy of the book How to Kill: The Definitive History of the Assassin. The PID agents then track his IP address and discover that the man is indeed located in downtown Manila, kilometers away from the president's hotel, and his social media posts reveal that he is traveling in the direction of the president's hotel. They continue to monitor him. -Daily Beast

"With social media, there's software that can scroll through all of [the threats] at a much faster rate than any human can do it, so in some regards it makes it easier. But the bread and butter of what we do is the human element—and the people that work the mission—and that's never going to change," Special Agent Gibson told the Daily Beast.

The situation grew tense - as the Secret Service still wasn't sure of the operative's pinpoint location 20 minutes prior to Air Force One touching down in Manilla. "What is going on proactively to track this guy down?" Special Agent Ragan shouted into a phone. "I need an update. Now."

The operative was eventually tracked down to Luneta Park - situated around a mile north of Trump's hotel, where the suspect is reportedly with "an associate." After the Secret Service informed the Philippine National Police (PNP), the suspects were apprehended.

"With technology, that was one of the things that was a blessing for us, because we were able to know that he was moving close to us, where he was, and track him. That was a huge piece of stopping the threat," Special Agent Ragan tells me.

He adds, "Of course, we had a lot of help from the locals—and that's an essential key to it that can't be understated, is how great these foreign governments are, or even locals. If we go to Topeka, Kansas, the local law enforcement is such a help. We get so much support from the host committee, or the host country." -Daily Beast

"If you're wanting a movie to really know what it's like to work as a member of the Secret Service on a daily basis, watch Guarding Tess," says Special Agent Ragan. "There's a lot of truth to that. They're guarding the first lady and there's a lot of tedium, and that's a big part of what the job is. There's a lot of standing around, a lot of waiting, a lot of hoping that nothing bad happens, but then you've gotta be prepared if it does."

Impeachment 2.0: When Will The Backfire Begin?