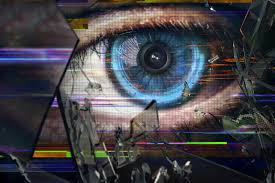 We may remember 2018 as the year when technology's dystopian potential became clear, from Facebook's role enabling the harvesting of our personal data for election interference to a seemingly unending series of revelations about the dark side of Silicon Valley's connect-everything ethos.

The list is long: High-tech tools for immigration crackdowns. Fears of smartphone addiction . YouTube algorithms that steer youths into extremism. An experiment in gene-edited babies .

Doorbells and concert venues that can pinpoint individual faces and alert police. Repurposing genealogy websites to hunt for crime suspects based on a relative's DNA. Automated systems that keep tabs of workers' movements and habits. Electric cars in Shanghai transmitting their every movement to the government.

It's been enough to exhaust even the most imaginative sci-fi visionaries.

More awaits us in 2019, as surveillance and data-collection efforts ramp up and artificial intelligence systems start sounding more human , reading facial expressions and generating fake video images so realistic that it will be harder to detect malicious distortions of the truth.

The mark of the beast isn't what you think: Trump, QAnon, Saint Germain and Covid-19

Blain: "A Global Reset Is Coming"

A Different Nation Will Rise from the Coronavirus