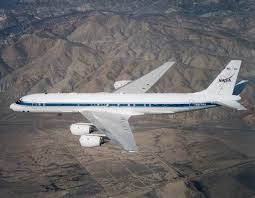 The plane was spotted flying extremely low to the ground over Altadena and Southern California on July 22, several weeks after California's Searles Valley was struck with a magnitude 6.4 and 7.1 within 24 hours around July 4/5.

NASA spokeswoman, Kate Squires, told CBS Los Angeles (CBSLA) that the plane was conducting a mission to study the effects of fire smoke on air quality. However, conspiracy theory-websites don't buy the government's explanation of why the aircraft was zig-zagging over the faultline.

Los Angeles County Sheriff's Department said the plane, with call sign NASA817, took off from Palmdale Regional Airport, an airport in Palmdale, California, before flying 2,000 miles over Central California and Nevada and then landing at Boise Airport, Idaho.

The Metro reported Californians were startled by the plane because it was flying at such a low altitude.

"It was scary, a little bit. You didn't know if was going to land," CBSLA reporter Jasmine Viel, who was commuting when the plane flew over her, said.

"Everyone kind of stopped in their cars, looking up. It was big and loud."