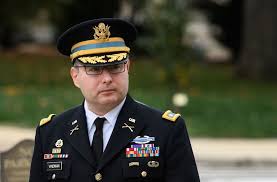 The fact that hardly anyone seems to be making it is just one more reason, I believe, that he very likely is working for the CIA and has been throughout his military career. Actually, very much to his credit, Rush Limbaugh has observed that Vindman appears to be employed by people other than those in his chain of command. He just stops short of speculating as to who, exactly, that might be, like, say, the CIA.

We're talking about the Jewish Ukrainian American military officer in the middle of the ginned-up Adam Schiff-Nancy Pelosi-MSM impeachment inquiry. From all indications, he is the man who shared his supposed concerns about President Donald Trump's July 25, 2019, telephone conversation with Ukrainian president Volodymyr Zelensky with the "whistleblower." The latter person has been widely identified as the Yalie, CIA analyst, and Democratic Party partisan, 33-year-old Eric Ciaramella. On its face, Vindman would appear to be acting in an insubordinate fashion toward the commander-in-chief of the United States Armed Forces, of which he is a part. At the same time, if we have learned nothing more from the entire Russiagate fiasco, it is that the U.S. intelligence community, abetted by the Operation Mockingbird press, has been in a state of almost open revolt against Donald Trump for quite some time now. What could explain the man's behavior better than that he is a part of that crowd?