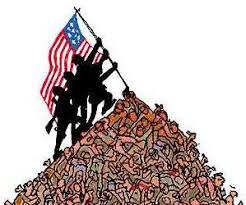 The culture and nation state of the United States of America is founded on the egregious and forceful dispossession of others. You might even call it an earlier version of fascism – institutional dehumanization for private profit. A myth, or grand lie, was created that we are an exceptional people, effectively pre-empting openly experiencing the important feeling of social shame and, in turn, blocking any accountability or genuine inquiry into our genocidal origins built on stolen land and labor, that murdered millions with impunity.

Thus, we live by fantasy of our superiority, which functionally makes us stupid, as if in a stupor. Applying the legal exclusionary rule to the culture at large, the USA is the "fruit of the poisonous tree", as with most "civilizations", founded on forcefully stolen land and labor, thereby lacking any moral or legal validity.

When I was a child in rural upstate New York in the 1940s and 1950s, I enjoyed small town life and the tranquility of a luscious surrounding nature. I had pictures of baseball stars plastered on all four of my bedroom walls. I recited a grateful prayer in my little sanctuary before going to sleep each night: "Thank you God for allowing me to have been born and raised in the United States, the greatest country in the history of the world, endowed by our Creator to bring prosperity to the impoverished, and Christianity to the heathen". It was a wonderful story, greatly enhanced by our nation's celebrated reputed victory over Fascism in Europe. Life was good, or so I thought.

Having been born on July 4, 1941, I was a patriotic baby of the World War II generation. My family was lower middle class, devout Baptists and, like my parents, I believed that the FBI under the "leadership" of J. Edgar Hoover protected our democratic Christian freedoms from the Russians. The Cold War propaganda was nothing short of spectacular, virtually all unchallenged by anyone I knew.

But there was another factor operating. Coinciding with the celebrated post-World War II victory, the nation experienced a unique 35-year blip in its history – an age of a large middle class imbibing in insatiable consumerism and optimism. My family replaced their icebox with a new electric refrigerator after the war, bought their first automobile, and by 1958 had purchased an 11-inch B&W television set. It was proof that we are an exceptionalpeople, and God's chosen people to boot. However, this optimism was tempered by fear of the Soviet Union that severely prevented genuine liberal dialogue and critical thinking education.

Norman Vincent Peale (1898-1993), a Dutch Reformed minister, wrote The Power of Positive Thinkingin 1952, a bestseller for 186 consecutive weeks, a book prominently in our home library, as it was in the Trump family home in Queens, New York. Peale also wrote a monthly magazine, Guideposts,which my parents read regularly.Peale served as a guru for the post-depression, post-World War II generation with his cult-like, self-help "bible" for achieving material success with divine blessings. Peale described himself as a "missionary to American business", opposing unions and the New Deal. Thus, he was exceedingly popular with ambitious US Americans, especially White folks, both the rich, and those seeking riches.

Donald L. Trump, as a 6-year-old child began to regularly attended Peale's New York City church with his parents. Peale officiated at Trump's first marriage with Ivana Zelnickova, and both Trump's sisters were married at Peale's church. To this day, Trump lauds Peale for his success, unrestrained self-confidence, and from whom he learned modern branding. In Trump's 2015 book, Crippled America: How to Make America Great Again[1], he proclaimed that "I am a Christian…I love God, and I love having a relationship with Him…[and] the Bible is the most important book ever written".

Many theologians considered Peale as "God's salesman", critiquing him as a dangerous con man and fraud since he convinced people to believe that all basic problems were personal, unrelated to social, political, or economic contexts. Personal failures, Peale, said, were a sign of spiritual weakness, preaching that everyone has the power to make oneself happy and rich.  It fits perfectly with US American exceptionalism and Trump's narcissism[2].

I was in Viet Nam in 1969 where I turned 28 years, having been drafted in 1966 during my fourth semester of law school. It was there that my Disney bliss rapidly evaporated. The entrance sign to my squadron's in-country headquarters said, "Welcome to Indian Country". This reminded me of the slogan, "the only good Indian is a dead Indian", hinting the same plight for the Vietnamese. Incidentally, Trump, five years my junior, enjoyed five deferments enabling him to avoid Viet Nam.

While performing auxiliary duty as a USAF Combat Security officer, I documented the immediate aftermath of atrocities committed from the air that annihilated inhabited, undefended villages. I was sickened from the sight of hundreds of villagers lying dead and suffering horribly in their villages. I wondered who the fuck am I, a 6' 3" White man, 9,000 miles from my rural farming village in New York State? These Vietnamese were in their homevillages. Village life was the essence of Vietnamese culture and we were systematically destroying it. I felt depressingly unauthentic, like a dumb ideological robot, and began to realize that being a privileged White man was in fact an emotional and intellectual disability. White male supremacy was a powerful force, as it enabled a kind of mindless "sliding" through life, pre-empting the need to ask serious questions. However, my discovery of empathy began to radicalize me. I wondered whether we had become sadistic criminal psychopaths? Or have we always been?   Hmm?!

Accumulating high body counts, from babies to grandparents, and every age in between, was politically comforting to US politicians and to a large number of their their taxpaying constituents. We simply created a fiction that we were killing the "enemy" to satisfy the emotional, and political momentum of stopping the bogeyman – Communism – when in fact we were murdering innocent Vietnamese peasants. Mass murder was normalized. When the US war ended in 1975, 13,000 of 21,000 Vietnamese villages had been deliberately wiped out. Huge B-52 bombers left 26 million bomb craters, while targeting and destroying almost 950 churches and pagodas, 350 clearly marked hospitals, nearly 3,000 educational institutions, over 15,000 bridges, 18 power plants, 40 factories, 10 million cubic meters of dikes, and 25 million acres of farmland. The US also chemically poisoned food supplies and forests. Our cultural corruption is so extreme we proudly ordered B-52 death machines flying five miles high blessed by God-fearing chaplains to bomb unarmed, mostly Buddhist peasants living nine thousand miles across the Pacific.  What?!

Several million peasants were gruesomely, senselessly murdered, with countless additional millions permanently maimed. It was barbaric. It was genocidal. I felt personal shame for my participation, and intense anger of betrayal. At times I felt suicidal. My White male conditioning had made me "disabled", i.e., a kind of stupidity whose mind hadn't even thought to seriously ask whyI was putting my life on the line in a small country across the seas I knew nothing about? I had been part of a massive conspiracy to violate international law and destroy a sovereign people. Huh?! But I had been conditioned to think that "America" was nonetheless, exceptional.

On The Precipice Of Martial Law