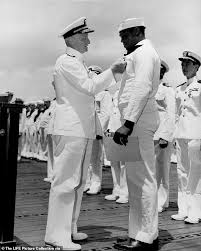 The US Navy is expected to honor a World War II hero when a new aircraft carrier is named for Mess Attendant 2nd Class Doris Miller.

The announcement is expected to be made at Pearl Harbor Monday, The Honolulu Star-Advertiser reported Friday.

Miller was the first African American to receive the Navy Cross for valor.

Miller was recognized for manning a machine gun on the USS West Virginia and returning fire against Japanese planes during the December 7 1941 attack on Pearl Harbor.

USS Miller, a destroyer escort, was previously named in his honor.

'I think that Doris Miller is an American hero simply because of what he represents as a young man going beyond the call of what´s expected,' said Doreen Ravenscroft, a team leader for the Doris Miller Memorial.

An African American was not allowed to man a gun in the Navy in 1941, Ravenscroft said.

'Without him really knowing, he actually was a part of the Civil Rights movement because he changed the thinking in the Navy,' Ravenscroft said.