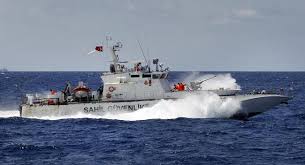 The video, which first appeared via a Middle East Telegram or other social media channel, shows a small crowded motor boat full of Syrian refugees being rammed by a much larger Turkish patrol boat.

The video appeared online and went viral on Sunday; however, it's uncertain the precise date or location, but it likely took place in the Aegean Sea.

Women and children can be heard screaming in the video while trying to get away from the fast-approaching Turkish vessel, after which the larger coast guard boat rams into the migrants at high speed. It's unclear the extent of injuries suffered by those in the packed boat, and no one appears armed or to have been acting aggressively.

Turkey's coast guard has long been accused of taking harsh measures to prevent an estimated 60,000 to new refugees attempting to traverse the Mediterranean. It's hardly the first time migrant and refugee boats have been rammed during the dangerous trip; however, past incidents have involved human-trafficking boats or piracy-related groups and not state actors like in this case.