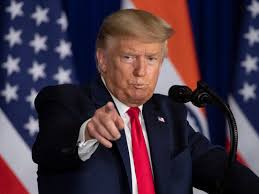 Usually, we don't give much credence to the Washington Post's inside-baseball stories purporting to offer a 'peak behind the curtain' while creating a venue for vindictive officials to exact their revenge by anonymously trashing the president or rivals within the administration.

But today, WaPo's account basically confirms what we suspect has been unfolding behind the scenes, with the president turning on yet another federal agency and blaming it for spooking the markets. In the past, Trump has (either publicly or privately) blamed Democrats, Treasury Secretary Mnuchin, Labor Secretary Wilbur Ross, Boeing and - of course - Jay Powell for the market selloffs.

Now, we can add the CDC to that list.

The paragraph below is basically the heart of WaPo's story, describing President Trump's impotent fury at helplessly observing the selloff from afar.

While he has spent the past two days traveling in India, Trump has watched the stock market's fall closely and believes extreme warnings from the Centers for Disease Control and Prevention have spooked investors, the aides said. Some White House officials have been unhappy with how Health and Human Services Secretary Alex Azar has handled the situation, they said.

Specifically, Trump was furious at the CDC for its press conference on Tuesday which appeared to rattle the market and cemented the selloff for a fourth day. The No. 1 rule for successful propaganda is to make sure your source still appears credible to the unengaged reader or viewer. When one insists on pushing a narrative that is completely divergent from the lived experience of millions, credibility can be damaged.