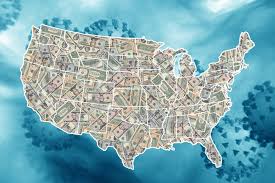 The bill - which still needs to be passed by the Senate and the House - provides direct help to citizens, businesses, hospitals and state and local governments. According to the report, a vote could come in the Senate as soon as today.

According to Senate Minority Leader Chuck Schumer (D-NY), checks would be cut April 6.

Big Businesses: About $500 billion can be used to back loans and assistance to companies, including $50 billion for loans to U.S. airlines, as well as state and local governments.

Small Businesses: More than $350 billion to aid small businesses, including $10 billion in SBA grants of up to $10,000 for small business costs, and $17 billion for SBA to cover six months of payments for businesses with current SBA loans.

Hospitals: A $150 billion boost for hospitals and other health-care providers for equipment and supplies.

Individuals: Direct payments to lower- and middle-income Americans of $1,200 for each adult, as well as $500 for each child.

Unemployment insurance would be extended to four months, and increased to $600 per week. More workers will be eligible for coverage.

Economic Crisis Caused by Politicians and Bankers Being Blamed on Covid-19. How Convenient!