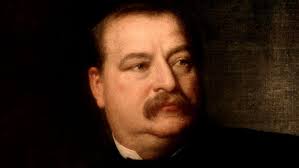 "(T)he (veto power) has a further use. It not only serves as a shield to the Executive, but it furnishes an additional security against the enaction of improper laws. It establishes a salutary check upon the legislative body, calculated to guard the community against the effects of faction, precipitancy, or of any impulse unfriendly to the public good, which may happen to influence a majority of that body. "

Let's talk about Grover Cleveland. In him we find a man who wielded the veto hammer with principle and alacrity.

In 1881 he was elected mayor of Buffalo, New York.

From The Papers of Grover Cleveland edited by James D. Richardson:

"He entered upon the office January 1, 1882, and soon became known as the "Veto Mayor," using that prerogative fearlessly in checking unwise, illegal, and extravagant expenditures. By his vetoes he saved the city nearly $1,000,000 in the first half year of his administration.