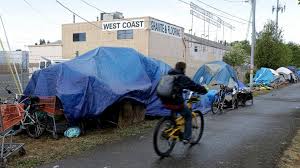 "Businesses and households are racking up huge amounts of debt. You have people who aren't paying their rent and who are delaying their mortgages," according to Eric Fruits, a research director at the Cascade Policy Institute.

Given this backdrop, voters in Portland, Oregon will decide on Tuesday to approve taxes on personal income and business profits which would raise $2.5 billion over a decade for the city's homelessness initiatives, according to KATU.

The ballot measure was planned before the pandemic reduced the U.S. economy to tatters. Proponents, including many business leaders and major institutions, argue the taxes are needed now more than ever in a region that has long been overwhelmed by its homeless problem.

How voters in the liberal city react amid the pandemic will be instructive for other West Coast cities struggling to address burgeoning homeless populations as other sources of revenue dry up. The measure is believed to be one of the first nationwide to ask voters to open their wallets in a post-COVID-19 world. -KATU