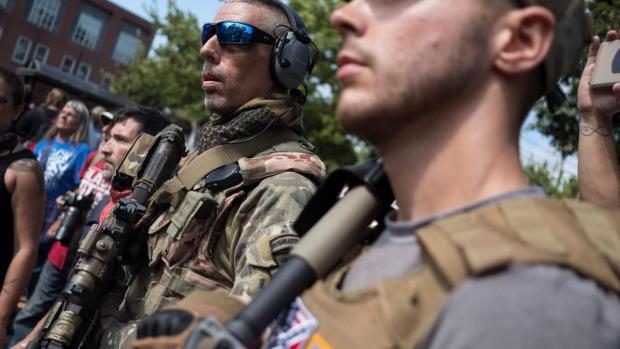 In Omak, Wash., a city of fewer than 5,000 located in the foothills of the Okanogan Highlands, plans for a demonstration began in a private chat on Facebook Messenger.

But public threats poured in when Sinai Espinoza, a 19-year-old student at a local community college, joined other young women in promoting their "Peaceful March for George Floyd." The violent messages on social media included a vow that "When the looting starts, the shooting starts," echoing President Donald Trump's rhetoric on Twitter. Another characterized the upcoming gathering as "free target practice."

When the march unfolded earlier this month, bringing more than 400 people to a park opposite the public library, an armed militia stood guard - at ground level but also atop nearby roofs, as if ready to act as snipers.

"Honestly, it was terrifying," Espinoza said. "They claimed they were there to protect the city from outsiders, but it felt more like preparation to kill."

The demonstrations against racial injustice and police brutality that have convulsed major metropolitan areas, from Minneapolis to Miami, have also made their way into small-town America, redrawing the geography of the Black Lives Matter movement. But the activists spearheading unlikely assemblies in rural and conservative corners of the country have faced fierce online backlash and armed intimidation, which in some places is unfolding with the apparent support of local law enforcement.