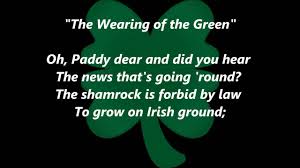 ... language, their music, their native dress, even hanging, drawing, and quartering men who flaunted the Irish color—green—and throwing women wearing green to the troops.

They even wanted to forbid the shamrock, a species of clover, from being worn.

In the long run, the British brutalitarian stab at cultural genocide didn't work and Ireland is its own sovereign nation today. Its own sovereign people. There are very few examples in world history of a population so grimly tenacious that they can be ground under the heel of "absolute despotism" for 850 years and still keep fighting to be free. I am proud to be of Irish descent.

However, if we condemn those British efforts to wipe out every trace of Irish culture, as we should, then what are we to make of similar efforts right here, where we live, to do exactly the same thing to the descendants of those who lost what is mendaciously called the Civil War?

Are Electric Cars Cheaper To Operate Than Gas Cars?

The TSLA Call-Buying Scheme Is Not Working Again Today

To Shift For Oneself?

Will Genetically Modified Humans Be Patented? – Questions For Corbett #064