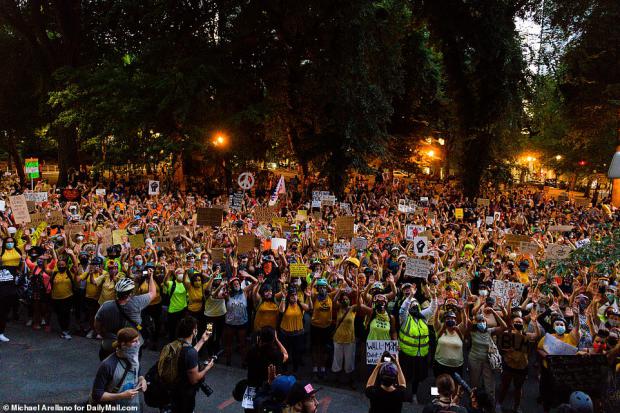 The crowd gathered outside the Portland Justice Center Monday night initially started out with about 1,000 protesters before quickly doubling in size by 9.45pm.

Demonstrators were shown singing 'Hands up! Please don't shoot me' to the tune of 'Ring around the Rosie,' in footage taken of the peaceful protest.

According to Bellingcat reporter, Robert Evans, at some point the protesters 'tore open the doors of a federal courthouse and then beat back the agents inside'.

Throughout the night, Evans shared a series of tweets and videos about the incidents that occurred during the protest, including how people reportedly 'forced the federal agents back inside their courthouse'.

Evans tweeted that 'the crowd is now throwing bottles at their hands as they try to shoot through murder slits' in a wooden structure built around the courthouse to protect it.

Monday also marked the third night that the 'Wall of Moms' had taken to the streets. The parents were similarly moved to protect protesters Saturday, until federal agents moved in and tear gassed the crowd.