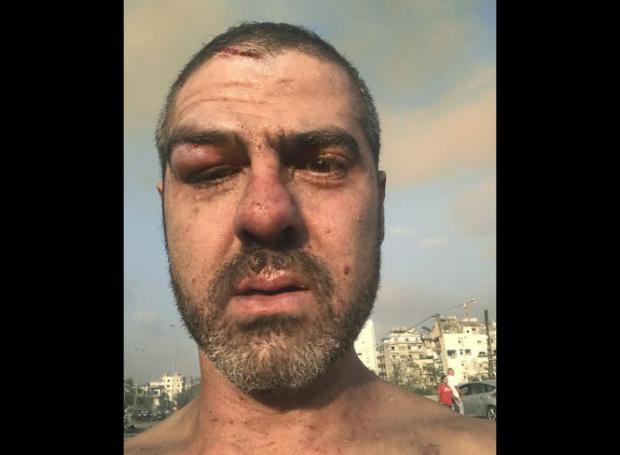 I was less than 500 yards away, so really, I mean it literally: I don't know how I'm still here.

I went outside onto my apartment's balcony, scanning the sky for jets before glimpsing fires eating away at the port. I tweeted a video of the rising plume of smoke, scrambled down the stairs and fired up my motorcycle, heading toward the port to take a closer look.

Then ... my memory goes dark. The next thing I can recall is the hell of coming to, after who-knows-how-many minutes of unconsciousness. My right eye was swelling shut, but I could register some people running, others screaming, still others lying bloodied and motionless on the ground. There was a carpet of glass, along with the crumpled husks of cars haphazardly strewn all over the road. The sky had turned a smoky sepia color, like an old-fashioned photograph.

The rest comes in disjointed flashes. I recall someone talking to me as they wrapped a bandage around my head, while I obsessed over finding my phones. When I did, I called my fiancee, who says she had to give me step-by-step instructions, as if to a child, on how to activate the location tracker so that she could come get me.

She arrived to find me with a trio of medics and another journalist. Apparently, we had a 10-minute screaming match about what to do with my motorcycle; I refused to abandon it, as good a sign as any that neither my stubbornness nor my irrational love for motorbikes were affected by the blast. Over and over, I kept asking if she was OK and telling her I had no idea how I got to where I was. Days later, I still don't know. It's a blank, like the words of a song you know you ought to remember but just can't.

I've since been playing Sherlock Holmes with my own life, trying to piece together what I did in the minutes before and the two hours after the blast. I've pored over pictures on my phone I don't recall taking, discussed what was said with friends I don't remember seeing. To an editor in London, I sent a slightly garbled message I don't remember composing:

I we're a video

I tweeted a video

My motorcycle helmet — what's left of it — offers some clues to what happened, as do the marks and slashes on my arms. It seems clear that the helmet saved my life, and that my arms were cut up either from my fall off the bike or because I'd raised them for some reason at the moment of the blast, which bombarded them with high-speed debris, like shrapnel.

But none of this is conclusive. It probably never will be. Tantalizingly, there's a video on my phone that won't open from the time of the explosion. I keep hoping I'll find a technical wizard to salvage it.

Nevertheless, a picture emerges of two things. One is that I was extremely lucky. The other — and this is a surprise for a card-carrying misanthrope like myself — is that people can be incredibly, almost irrationally kind in times of crisis.

One friend offered his car. Another drove my fiancee and me more than an hour outside Beirut to find a hospital that wasn't inundated with casualties. A friend of my brother's — whom I had never laid eyes on before — arranged for his neurosurgeon buddy to set up a CT scan appointment and eye examination, and chauffeured me from hospital to hotel to clinic. Everyone helped — no hesitation, no questions asked.

That generosity seems everywhere. In my neighborhood, roving bands of broomstick-toting volunteers walk around battered streets and apartments, sweeping away blood-soaked glass shards, pulverized furniture and the other detritus of lives shattered. Others grab tools, salvaging what materials they can to board up entrances and restore some semblance of normalcy for shell-shocked residents. Dozens of charitable groups and mutual aid organizations have reoriented themselves to dealing with the tragedy. All this is done in the almost complete absence of the state, whose carelessness appears to have caused the cataclysm in the first place.

Perfect diamond can be your best friend... for $30million: Flawless 102-carat white diamond...

I pledged what? Serbian President Vucic seems surprised after Trump announces that Belgrade...

What The UAE-Israel Deal Really Means For The Middle East