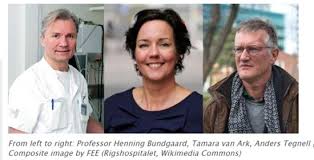 That's less than one-third of the number of Danes who die from pneumonia or influenza in a given year.

Despite this success, Danish leaders recently found themselves on the defensive. The reason is that Danes aren't wearing face masks, and local authorities for the most part aren't even recommending them.

This prompted Berlingske, the country's oldest newspaper, to complain that Danes had positioned themselves "to the right of Trump."

"The whole world is wearing face masks, even Donald Trump," Berlingske pointed out.

This apparently did not sit well with Danish health officials.

They responded by noting there is little conclusive evidence that face masks are an effective way to limit the spread of respiratory viruses.

"All these countries recommending face masks haven't made their decisions based on new studies," said Henning Bundgaard, chief physician at Denmark's Rigshospitale, according to Bloomberg News.