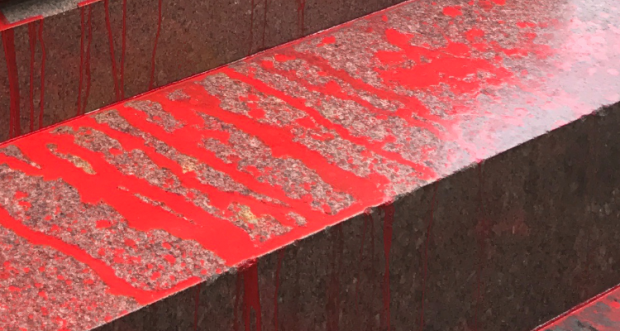 The felony criminal mischief charges are more serious because they carry a gang enhancement. Prosecutors said Wednesday that's justified because the protesters worked together to cause thousands of dollars in damage, but watchdogs called the use of the 1990s-era law troubling, especially in the context of criminal justice reform and minority communities.

"This is so far beyond just the enforcement of the law, it feels retaliatory," said Madalena McNeil, who is facing a potential life sentence over felony criminal mischief and riot charges. Charging documents say she bought red paint at a Home Depot before the July 9 demonstration sparked by a fatal police shooting ruling. She later yelled at and shifted her weight as if to slam into police during the demonstration, charges state. "It's really frustrating and scary ... I just feel so much concern for what this means for the right to protest in general."

The charges have Democratic leaders at odds in Salt Lake City, the liberal-leaning capital of conservative Utah, with the top county prosecutor arguing vandalism crossed a line and the mayor calling the charges too extreme.

The potential life sentence stands out as harsh punishment even among other people facing felony charges stemming from protests around the country. In Portland, Oregon, for instance, a 32-year-old man is facing up to 20 years on an arson charge alleging he broke into a building that houses the police headquarters and set an office on fire.