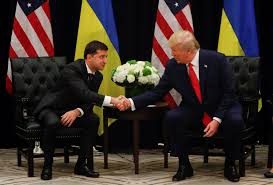 US policymakers should remember that alliances are supposed to be a means to the end, America's security, not the end itself. Absent necessity to protect an overriding, genuinely vital interest, risking war with a nuclear-armed power, in this case Russia, would be a particularly stupid policy.

Ukraine has a long, storied, and tragic history. Subsumed by the Russian Empire, Kiev briefly gained independence amid the Russian Revolution, German victory over the Bolshevik regime, and the bitter Russian civil war. (Poland also was intimately involved in the ludicrously complicated period of chaos and conflict.)

Unfortunately, the territory, augmented by lands that had been governed by Austro-Hungary, ultimately was reabsorbed by Moscow, this time through the new but not improved imperial Russia in the form of the Soviet Union. Ukraine suffered through the murderous Stalin-induced famine, known as the Holomodyr, which killed millions. Estimates vary widely but range up to about ten million.