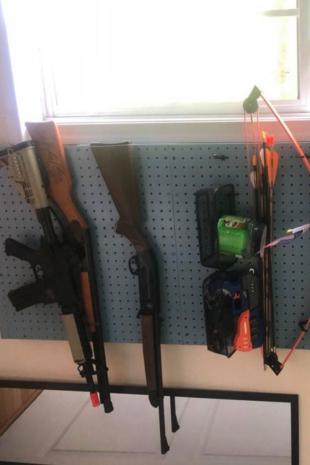 A Baltimore County, Md., fifth-grader got a visit from the police after his teacher called to report that she had seen a BB gun on the wall behind the student during a class video call.

The boy's mother, Courtney Lancaster Sperry, a Navy veteran, is warning other parents about a lack of privacy during virtual classes after her son was targeted by a teacher who saw what she thought was a scary-looking gun hanging on the wall of the boy's bedroom.

"While my son was on a Zoom call, a 'concerned parent' and subsequently two teachers saw his properly stowed and mounted Red Ryder BB gun and one other BB gun in the background," Sperry wrote on Facebook. "He was not holding them and never intentionally showed them on video. In fact, he was oblivious that they could even be seen in the background."

After the teacher reported the gun, the principal, Jason Feiler, decided to call the police to report the guns and ask that the home be searched.

The principal and the teacher cited a rule stating that students may not bring guns to school and claimed it extended to virtual classes as well, Sperry said, adding that the school handbook does not address rules for virtual learning at all. Besides, "he did not BRING anything to this meeting and he is in his own home," she said. "They were simply in the background in our home, safely stowed in a room behind a closed door, with no ammunition (if you can even call it that)."

Sperry told PJ Media that the school's vice-principal called her ex-husband, claiming to be checking on network connectivity. She believes the real reason for the call was to find out whose home her son was at. The vice-principal "ended the call without leveraging the opportunity to discuss the matter and rather was fishing for information to find out where to dispatch police," she said.