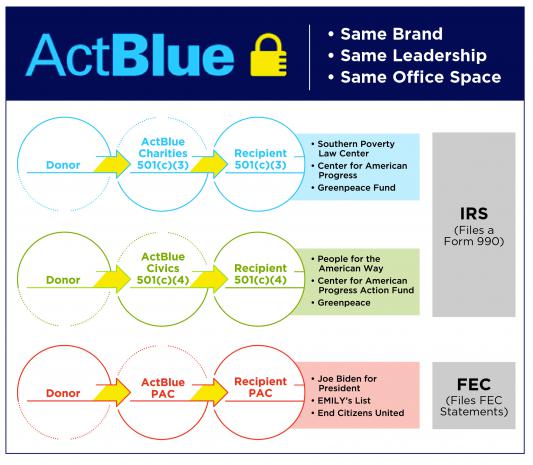 -- TO MAKE IT SEEM AS THOUGH EVERYTHING IS ABOVE-BOARD.

ActBlue is undeniably the cash cow of the progressive movement, boasting over $6 billion raised for favored candidates since 2004. The organization funneled more than $1.5 billion to leftist candidates in 2018 alone, and has moved almost $900 million to assist progressives thus far in 2019 and 2020.

Most of these contributions, according to ActBlue, come through gift cards of $100 or less. That's a lot of donations!

The organization has leveraged its powerhouse presence to negotiate a special relationship with banks so that it does not have to reveal donor names when processing its gift cards, as is normally required for virtually all online transactions.

Some people have long suspected this allows ActBlue or a mega-donor to easily break large donations down into smaller gifts to avoid campaign finance laws and Federal Election Commission scrutiny — once an individual donor or third-party organization has given $200 or more to a candidate, for instance, their information is supposed to be added to a public FEC database for the sake of transparency. ActBlue's structure could easily allow illegal donations made online to be broken down into smaller gifts from claimed U.S. sources with little chance of exposure. ActBlue's design would allow large donors to exceed contribution limits without even triggering the threshold for public reporting.