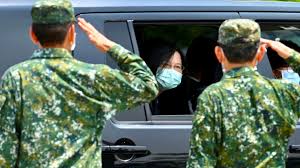 The Trump administration is planning a major arms sale to Taiwan that could include up to seven types of weapons systems, according to a report from Reuters. The deal would include cruise missiles, drones, and mines.

US arms sales to Taiwan have been a common occurrence since the diplomatic shift in 1979 when the US broke diplomatic ties with Taipei. The sales have always angered Beijing, who view the island as Chinese territory, making Taiwan one of the most sensitive issues in US-China relations.

But the sales are usually smaller and more spread out. Selling seven weapons system at once is a shift in US policy, which is not surprising given the Trump administration's increasingly hostile rhetoric and actions towards China.

Sources told Reuters that the weapons packages from Lockheed Martin, Boeing, and General Atomics are moving through the export process, and Congress is expected to be notified sometime in the next few weeks. Another source said President Trump is expected to be briefed on the matter by Secretary of State Mike Pompeo this week.