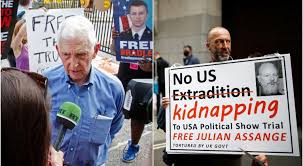 Whistleblower Daniel Ellsberg, who leaked the infamous Pentagon Papers, testified during the extradition hearing of WikiLeaks founder Julian Assange on Wednesday. Ellsberg warned that Assange would not see a fair trial if extradited to the US, and the whistleblower compared documents published by WikiLeaks to his leaks, and said both had been in the "highest public interest."

Ellsberg said he was shocked that low-level documents published by WikiLeaks contained information about assassination and torture. In his days working for the US government during the Vietnam War, the whistleblower said sensitive information like that was only available to the highest levels of government. The inclusion of such information in reports that can be accessed by so many people, Ellsberg said, means the practices have been "normalized."

Ellsberg discussed the Collateral Murder video published by WikiLeaks, which showed a US Apache helicopter indiscriminately kill over a dozen people, including two Reuters journalists.

"I was acutely aware that what was depicted in that video deserved the term murder, a war crime," Ellsberg said. "I was very glad that the American public was confronted with this reality of our war."