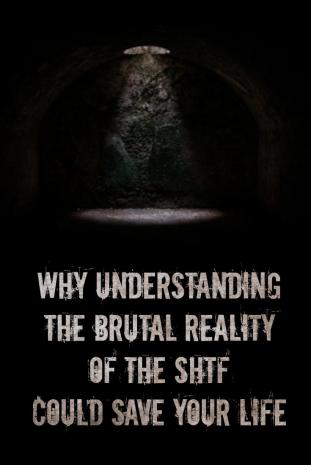 There's something incredibly important for your survival that a lot of folks aren't doing. I've written before about overriding your body's natural urge to freeze in panic when something terrible happens, but there's an additional step you must take. You need to know the horrible truth about the SHTF. The ugly, brutal truth.

Because as much as we stockpile, go to the shooting range and shoot stationary objects, can vegetables from our gardens, and raise chickens in our backyards, it only prepares us partially.

From my many interviews with guys like Selco and Jose, I know for a fact that an all-out collapse is a dirty, terrifying, and brutal matter of life and death every single day.

As much as we wish it was, the SHTF is not about you being in a bubble, peacefully working in your vegetable garden while the world goes to hell around you outside the bubble. The darkness can reach you wherever you are.

We're seeing this in cities around the country right now. Read this first-hand story of a National Guard member in Seattle and this eye-witness account of the riots in Kenosha. Look at the violent plans of wealthy young people arrested for rioting in New York City. Think about this hotly contested election. We're beginning to see armed conflict right here in the United States of America.

Think about these things and recognize that many parts of our nation are right on the brink of all-out disaster.

Ask yourself whether you're really, truly prepared for that.

Why is it so important to know about the bad stuff?

Many of us try to insulate ourselves from the dark things going on in the world. I know that I stay away from social media beyond what is required for work because I'm sick of the arguing and the hatred. There are certain articles in the news I hesitate to read because I know they will haunt me. This is human nature – we avoid things that scare us, sicken us, and make us unhappy.

But there are some exceptions to this rule that you should make.