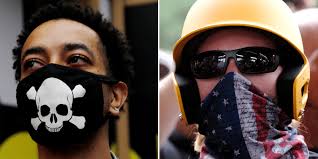 One key facilitator is intuitively obvious - it's the mask. Anonymity gives a sense of boldness to lash out and behave in aggressive ways. The original psychological study that established this proclivity was the famous (or infamous) Stanford study from 1971. This study in many ways established the social phenom of mirrored sunglasses, both as fashion chic and also their popular association with authoritarianism.

The takeaway from the study was that anonymity in many ways encourages behavior that most would not normally carry out. Updated studies in 2010 further validated the association of anonymity with aggressive and unkind acts, and, frankly, the beginnings of violent acts focused on self-gratification.

So, when some insisted the citizens mask up, the first flammable element was established for civil disorder. The order was to mask up—and most everyone dutifully did. Some of the masks were of little medical value, but no one questioned that—anything was acceptable.

In a first in modern human history, an entire populace now faced each other, masked-up. This was the first step toward chaos on the American street. Some didn't realize the unintended consequences; some did and exploited this opportunity for the next step in manipulating society.