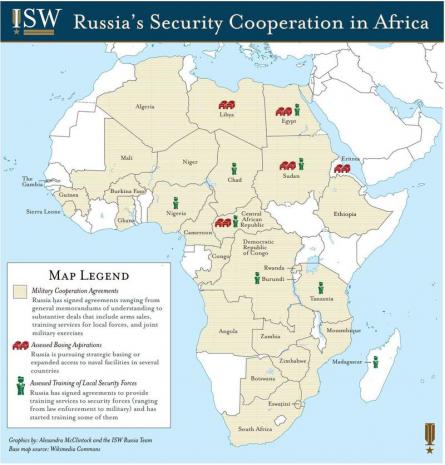 In 2019, Scottish politician Michael Ancram, Marquess of Lothian, requested of the Foreign & Commonwealth Office (FCO) the information they held on the installation plans of Russian military bases in Africa, particularly in Zimbabwe. There was concern that Moscow's influence might collide with London's.

Another major actor in Africa, Paris, became alarmed in 2018 as Russian Wagner and GRU security consultants started to appear in political circles in countries such as the Central African Republic, Eritrea, Democratic Republic of Congo, Sudan, and Libya alongside Khalifa Haftar's troops.

Security expertise as a diplomatic tool

Part of Russia's engagement with Africa is military.

The Russian army and Russian private military contractors linked to the Kremlin have expanded their global military footprint in Africa, seeking basing rights in a half dozen countries and inking military cooperation agreements with 28 African governments, according to an analysis by the Institute for the Study of War. U.S. officials estimate that around 400 Russian mercenaries operating in the Central African Republic (CAR), and Moscow recently delivered military equipment to support counterinsurgency operations in northern Mozambique. Russia is the largest arms exporter to Africa, accounting for 39 percent of arms transfers to the region in 2013-2017.