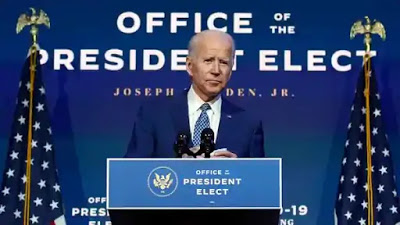 He is acting as though he fully expects to be sworn in as president on Wednesday, January 20, 2021, as he very well might be.

Here is the problem.

During Monday's news conference Biden was poised, confident and as charming as I have ever seen him.

He "looked presidential." I think it was his calm manner that was most relaxing and reassuring.

Of course, his words were those of a tyrant. They just didn't come off that way.

He spoke of a national mask-wearing mandate. He talked about national unity and said that "means rallying the country behind a national strategy with robust public health measures like mandatory masking."

He signaled higher taxes and sounded like Karl Marx with his theory of the exploited worker:

[I]t's time to reward work, not just wealth in America. We're going to have a fair tax structure that makes sure the wealthiest among us and corporations pay their fair share. Our plan will create millions of good-paying union jobs in manufacturing, building the vehicles, products, technologies that we're going to need for the future to compete with the rest of the world.