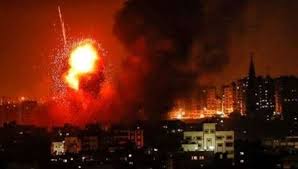 "Hamas will bear the consequences for all terror emanating from Gaza," the IDF announced in a tweet, after which it said Israeli aircraft had struck a series of Hamas military facilities including a rocket manufacturing location.

It doesn't appear there were any deaths as a result of the exchange of fire Friday night into early Saturday, but there were multiple injuries reported.

The Palestinian side is disputing that Israel hit merely Hamas military outposts or weapons facilities, claiming that instead a children's hospital was among places to suffer severe damage in Gaza.

"According to the official Palestinian news agency Wafa, Israeli warplanes fired a series of missiles on Saturday in the eastern, northwestern and central parts of the Gaza Strip, including open farmland, wounding a six-year-old girl and a man in his 20s," Al Jazeera reports. "The attacks caused power cuts in the eastern parts and caused some damage to a children's hospital, a center for disabled people, and shattered the windows of some residential buildings, according to the reports."