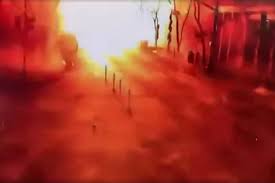 The clown show of fake news media wants you to believe this incident was a "lone bomber" (does "lone gunman" ring a bell?) who had a suicide wish and just happened to park his suicide van in front of a secret spy hub in downtown Nashville.

Obviously, if he wanted to commit suicide, he could have just used a pistol in his living room. The official narrative is a joke.

In today's Situation Update, we discuss details of the Nashville operation, the deep state, election rigging and what all this means for America.

Note: Since this was recorded, we have new information that points in the direction of the attack being a Direct Energy Weapon rather than a missile. Those details will be shared in the Dec. 28th update.

Why did Anthony Quinn Warner give his house to Michelle Swing?

Mysteriously, there is no crater in the street where the bomb supposedly went off.

If this was a conventional bomb, why isn't there more damage to all the buildings, other than shattered glass and relatively minor structural damage?

The explosion site is confirmed to be an AT&T / NSA secret VoIP Router Complex, used by the deep state to spy on all Americans.

How the attack took down FirstNet, which is used by law enforcement, National Guard and emergency responders.

How the feds recruit patsies to take the blame for their secret operations.

Details on how local police departments can be very quickly overrun in cities when multiple attacks take place during riots or uprisings.

Jerome Corsi says Sidney Powell is back in touch with the President.

Warning from a self-proclaimed ex-Antifa military veteran who says "comrade Biden" will set up commie roadblocks across America and enforce nationwide masks and left-wing obedience.