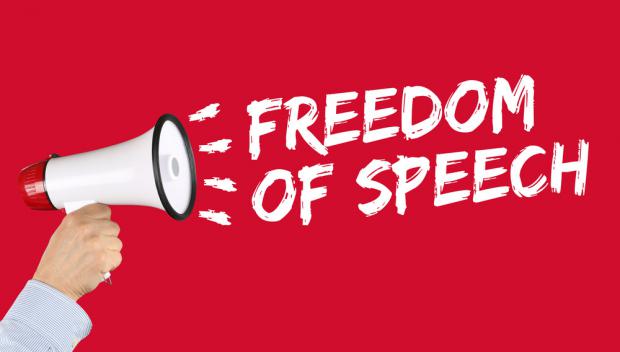 Part of the main duty of OffGuardian is to troll through the masses of media output and try and pick up patterns. Sometimes the patterns are subtle, a gentle urging behind the paragraphs. Sometimes they're more like a sledgehammer to the face.

From "flatten the curve" to "the new normal" to "the great reset", it's not been hard to spot the messaging going on since the start of the "pandemic". And that distinct lack of disguise has carried over into other topics, too.

We pointed out, a few days ago, the sudden over-use of the phrase "domestic terrorism" preparing us for what is, almost certainly, going to be a truly horrendous piece of new legislation once Biden is in office.

Well, the buzz-phrase doing the rounds in the wake of Donald Trump being banned from the internet is "the new definition of free speech"…and variations on that theme.

Firstly, and papers on both sides of the Atlantic want to be very clear about this, Donald Trump being banned simultaneously from every major social network is not in any way inhibiting his free speech.

Indeed none of the tens of thousands of people banned from twitter et al. have had their free speech infringed either. Neither have any of the proprietors – or users – of the Parler app which the tech giants bullied out of existence.

Free Speech is totally intact no matter how many people are banned or deplatformed, the media all agree on that (even the allegedly pro-free speech think tanks).

They also agree that maybe…it shouldn't be. Maybe "free speech" is too dangerous in our modern era, and needs a "new definition".