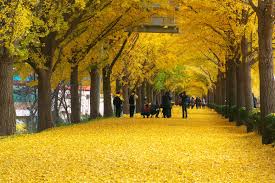 While some people take ginkgo leaf as a nootropic supplement, few people would imagine it's the equivalent of eating a horseshoe crab, that is to say it's an organism that, unlike every other member of its family, made it out of the time before mammals.

Ginkgo Biloba stands alone in its family Ginkgoaceae; the last of its relatives dying out likely during the last ages of the dinosaurs. Understanding of the tree's heritage suggests it would have gone the way of T-rex without a brush with homo sapien.

The evidence for this comes down to the slow arms race observed in evolution. There are five types of plants which produce seeds on the Earth today. Flowering plants, conifers, cycads, and gnetales are joined by the lonely ginkgo family, which scientists suggest may have contained many different species based on the fossil record, specifically in China.

About 130 million years ago, flowering plants really started stealing the show, developing sweet nectar in their flowers to attract pollinators, and sweet fruit to attract animals for dispersing seeds. Ginkgo on the other hand relied on the wind to blow pollen from male to female trees.

This was hypothesized as being an inconsistent strategy, as ginkgo are sometimes observed to change sex, perhaps a failsafe mechanism to increase the chances of reproduction.