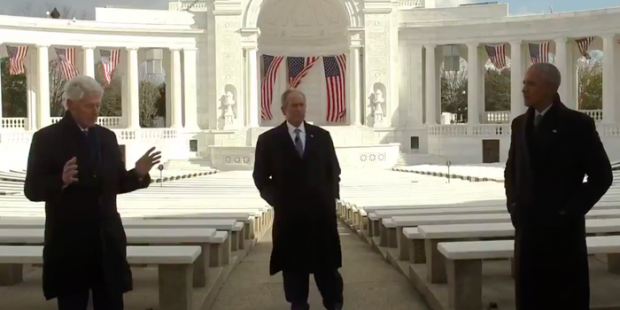 Three former US presidents on Wednesday recorded a remarkable video message for their friend Joe Biden, promising to help him with whatever he needed and wishing him and the country well.

In a strong sign of unity, much needed after the divisive last four years, the two Democrats - Barack Obama and Bill Clinton - and a Republican, George W. Bush, spoke of their hopes for the future while standing in the Memorial Amphitheater at Arlington National Cemetery.

Obama, 59; Clinton, 74; and Bush, also 74, have all known Biden for many years and wished him well as he stepped into the role they previously held.

The trio also spoke of the importance of a peaceful transition of power and establishing unity across the nation.

Donald Trump was notably absent after he left Washington earlier on Wednesday, becoming the first president since Andrew Jackson in 1869 to snub his successor's inauguration.

Jimmy Carter, 96, stayed away due to COVID concerns but sent a message of congratulations.

Clinton, Bush and Obama stood at a safe distance from each other while filming the video in a conversational style.

'One of my fondest memories of the inauguration, was the grace and generosity that President Bush showed me, and Laura Bush showed Michelle,' he continued, making no mention of Trump.