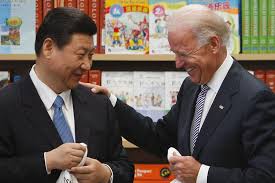 What could possibly go wrong? President Trump warned about Biden's ties to the Chinese, yet somehow "80 million" people "voted" for him. Well, we are about to find out exactly how much we're going to be compromised. We warned you.

Bill Burns, Biden's pick to head the CIA has been president of the Carnegie Endowment for International Peace, which has enjoyed a decade-long relationship with the China-United States Exchange Foundation (CUSEF), the National Pulse has reported. The foundation dates back to at least 2009.

CUSEF is part of the Chinese Communist Party's United Front, which seeks to "co-opt and neutralize sources of potential opposition" while encouraging other foreign interest to "adopt positions supportive of Beijing's preferred policies."

CUSEF has sponsored trips for CCP officials to speak at the Carnegie Endowment for International Peace, the outlet reports.

For example, in 2009 CUSEF brought in the former mayor of Shanghai who also served as vice-chairman of the CCP's Political Consultative Conference for a keynote speech, a trip that was paid for by CUSEF.