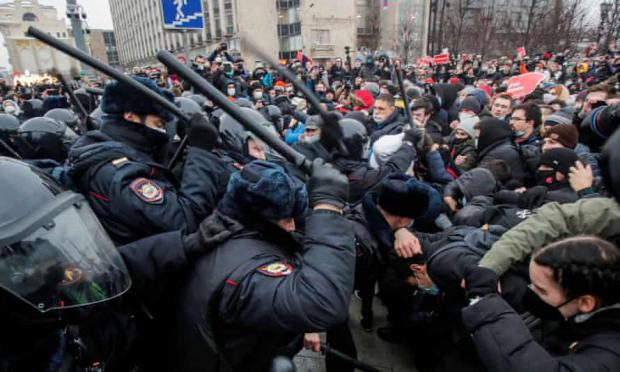 Earlier on Saturday as pro-Navalny protests began "sweeping across Russia" - as CNN dubiously put it (which have not numbered more than in the thousands in any one place) - we asked the question: are we witnessing the start of a manufactured 'color revolution' targeting Putin and the ruling government under the banner of the Navalny 'nerve agent' saga?

Of course, it's too early to tell. But already on 'day one' of major protests across several Russian cities the US Embassy in Moscow is highlighting the protests and their locations on its website. While ostensibly the embassy is directing citizens to "avoid" these demonstrations, given the possibility of violence, the State Department-sponsored public notice lists in surprisingly specific detail the location and times of a dozen protests in large cities.

Russia's foreign ministry is livid, and has charged the US Embassy with giving unnecessary "cover" to the 'unauthorized' protests. Essentially the Kremlin is alleging that the 'notification' is a US Embassy ploy to actually publicize and promote the protests.

Here's the full Russian foreign ministry response to the provocative US Embassy webpage as featured in TASS:

Russia plans to view the attempts of the US embassy in Moscow to "cover" the unauthorized rallies in Russia as interference in internal affairs, the Russian Foreign Ministry wrote on its Telegram channel on Friday.

"All that coincides with Washington's provocative doctrinal guidelines to encourage 'protests in the countries with unwanted governments'," the Foreign Ministry said. "Any attempts of this 'coverage' of unauthorized rallies will be regarded as gross interference in our country's domestic affairs and will lead to a corresponding response."