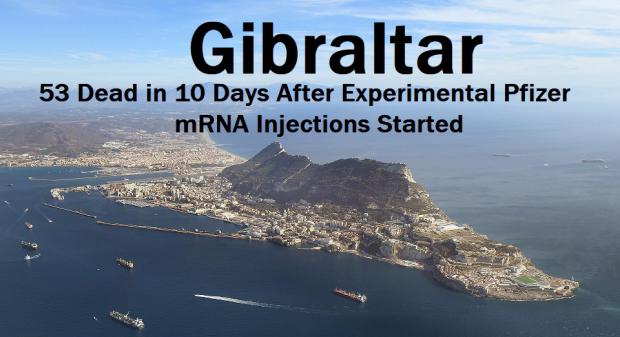 Gibraltar is a British Colony at the southern tip of the Iberian Peninsula attached to the country of Spain. It's population is just over 30,000 people, and it is best known for its huge "rock," the "Rock of Gibraltar."

I have been contacted by residents in Gibraltar stating that 53 people have died in 10 days immediately following the roll out of injections of the Pfizer mRNA COVID injections, and calling it a "massacre."

Local media reports confirm the deaths, but blame them on COVID, and not the COVID injections.

However, prior to the roll out of the injections, it is reported that only 16 people in total died "from COVID" since the beginning of the "pandemic" about a year ago.

Ever since the epidemic began, sorting genuine Covid deaths from others has been a major issue. Now we have the added problem of vaccines in the mix. The UK now allegedly has the highest daily "Covid death" rate ever. Even higher than the "First Wave," in spite of the substantial degree of herd immunity that has inevitably accrued since the beginning. This atypical "Second Wave" coincides with the vaccine roll-out. Are the two connected?

Gibraltar, normally called simply "Gib," provides a very clear picture. This tiny British Colony, barely three miles long, appended to the South coast of Spain, has only 32,000 residents. It had suffered relatively little from the epidemic before the 9th January this year, with only seventeen deaths for the whole period. The death rate was well down the Deaths per Million League Table. This was not due to isolation, since Spanish workers have continued to pour into Gib every morning, and back out every evening.

Since the 9th January "Covid deaths" per million have rocketed to Third Place on the Worldometer site. Thirty-six more deaths in little over a week. What changed on the Ninth? The RAF flew in nearly 6,000 Pfizer vaccines, cooled to -70C by dry ice. They were put to use quickly to avoid the risk of degradation. Tiny Gibraltar is like a petri dish; in no other place has there been such a brutally clear relationship between vaccine roll-out and increased "Covid deaths." Local media and Government have not even referred to the obvious connection. And media elsewhere has conveniently not noticed. Yet failing to recognise that these deaths demand, at the very least, immediate investigation, requires a criminal failure of judgement.