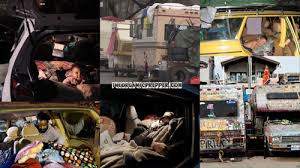 However, what is lacking is the exposure of the dark underbelly of the "modern-day nomad" culture. In other words, they neglect to mention the fact that the enormous growth of the "modern-day nomad" is rooted in the fact that the world economy has all but collapsed, now mired in a global economic depression of unemployment, low wages, and personal financial catastrophes.

While it sounds romantic, it's often rooted in desperation.

Nevertheless, some of the stories begin in the following way:

If you look closely on city streets, campgrounds, and stretches of desert run by the Bureau of Land Management, you'll see more Americans living in vehicles than ever before. It was never their plan.

"I wasn't prepared when I had to move into my SUV. The transmission was going. I had no money saved. I was really scared," said April Craren, 52, bundled in blankets atop a cot inside her new minivan, a 2003 Toyota Sienna.

6 Things to expect when you start a small-scale homestead

America's first 3D-printed neighborhood to be built in California