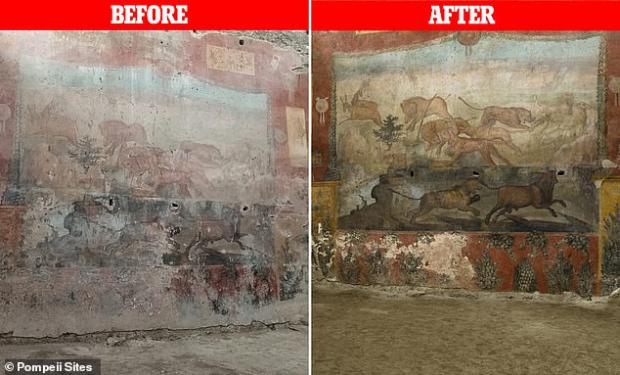 A stunning fresco in the garden of Pompeii's Casa dei Ceii (House of the Ceii) has been painstakingly laser-cleaned and touched up with new paint by expert restorers.

The artwork — of hunting scenes — was painted in the so-called 'Third' or 'Ornate' Pompeii style, which was popular around 20–10 BC and featured vibrant colours.

In 79 AD, however, the house and the rest of the Pompeii was submerged beneath pyroclastic flows of searing gas and volcanic matter from the eruption of Vesuvius.

Poor maintenance since the house was dug up in 1913–14 saw the hunting fresco and others deteriorate, particularly at the bottom, which is more vulnerable to humidity.

The main section of the fresco depicts a lion pursuing a bull, a leopard pouncing on sheep and a wild boar charging towards some deer.

Frescos commonly adorned the perimeter walls of Pompeiian gardens and were intended to evoke an atmosphere — often one of tranquillity — while also creating the illusion that the area was larger than in reality, much as we use mirrors today.

'What makes this fresco so special is that it is complete — something which is rare for such a large fresco at Pompeii,' site director Massimo Osanna told The Times.

Alongside the hunting imagery of the now restored fresco, with its wild animals, the side walls of the garden featured Egyptian-themed landscapes, with beasts of the Nile delta like crocodiles and hippopotamuses hunted by with African pygmies and a ship shown transporting amphorae.

Did Shakespeare Base His Masterpieces on Works by an Obscure Elizabethan Playwright?