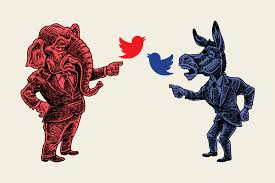 The biggest social media sites are now leftist echo chambers thanks to the banning of Donald Trump and tons of his supporters, data from CrowdTangle has revealed.

The bias is so extreme it's downright comical.

– The combined Twitter following for the 10 elected Democrats with the biggest audiences is 102 million compared to 23 million for the top 10 Republicans. Even taking President Biden and Vice President Kamala Harris out of the equation, Democrats' following is nearly triple Republicans'.

– On Facebook, the top 10 Democrats have generated 2.5x more interactions than top 10 Republicans over the last 30 days, per CrowdTangle data.