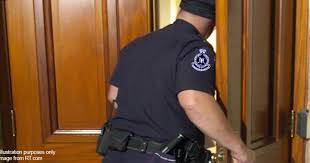 A new Supreme Court case may determine if police have the power to enter a person's home without a warrant. Years of American law precedent and the US Constitution are quite clear in the restraints put on government agents. However, that isn't stopping the police, government, and activist judges from doing what they can to continue to chip away at those basic protections.

We know the First Amendment and Second Amendment are under attack. Now the Fourth Amendment is taking another volley.

Turn down the volume, folks, or you may have to face the Supreme Court

Lange vs. California is a case that centers around a traffic stop in California. California Highway Patrol followed Arthur Lange, and only a few seconds elapsed between when the officer turned on his blue lights and when Lange made the turn into his driveway, then his garage.

Lange's crime? Playing his radio too loud and occasionally beeping his horn. After the officer entered Lange's garage, he began to suspect Lange had been drinking. Now the case is before the Supreme Court of the United States.

It might not seem like much, but this case could have far-reaching repercussions for the Fourth Amendment and Constitutionally protected rights. How?

The Justices are tasked with essentially what amounts to national guidance regarding when police in pursuit of a suspect can enter someone's home without a warrant.

The US Constitution requires a warrant, unless…

The right of the people to be secure in their persons, houses, papers, and effects, against unreasonable searches and seizures, shall not be violated, and no warrants shall issue, but upon probable cause, supported by oath or affirmation, and particularly describing the place to be searched, and the persons or things to be seized.