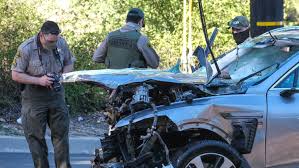 CBS News reported Wednesday morning that the Los Angeles County Sheriff's Department executed the warrant to get the data from the black box that was in the 2021 Genesis GV80 SUV that Woods was driving when he crashed in Rancho Palos Verdes last week.

The black box could give them information such as how fast Woods was traveling at the time of the wreck, whether he hit the brakes and whether the air bags inflated properly.

The day after the wreck, L.A. Sheriff Alex Villanueva said that no criminal charges were being considered against the 45-year-old Woods.

"There was no evidence of any impairment whatsoever, he was lucid," Villanueva said.

At 7:12 a.m. on Feb. 23, Woods was traveling north on Hawthorne Boulevard, at Blackhorse Road, when his SUV struck the center divider, crossed it and careened across all southbound lanes, hit a tree, rolled over, and came to a stop on its side in some nearby brush.

Woods was extricated from the SUV by firefighters and rushed to Harbor-UCLA Medical Center in Torrance, where he underwent a lengthy surgery for fractures on his right leg and ankle. He has since been transferred to Cedars-Sinai Medical Center for follow-up procedures.

"I Shoot a Bunch of 3D Printed Guns - Do My Hands Survive?"

House Will Vote on Whether to Make Washington D.C. a State Tuesday