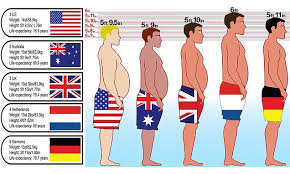 Eighth worst death rate on globally when size of its population is factored in, with 152.5 victims per 100,000

Also home to highest percentage of fat people with 67.9% of adults having a body mass index (BMI) above 25

The US may have suffered the highest coronavirus death toll in the world because almost 70 per cent of its adult population is overweight, according to a major report.

Research by the World Obesity Federation found Covid deaths have been 10 times higher in countries where over half of adults are overweight, and they have accounted for a staggering 90 per cent of global deaths.

So far almost 518,500 Americans have died from the virus, which is the highest death toll of any nation and double the number of victims in second worst-hit Brazil. The US has the eighth worst Covid death rate globally when the size of its population is factored in, with 152.5 victims per 100,000 people.

It is also home to the highest percentage of overweight people, according to the WOF, with more than two-thirds (67.9 per cent) of adults having a body mass index (BMI) above 25. A healthy range is between 18 and 24 and people with a BMI of over 30 are considered obese. More than 70 million Americans are obese.

Dr. Derek Knauss: "COVID is Fake; Sick Actually Have Influenza "A" or "B"**