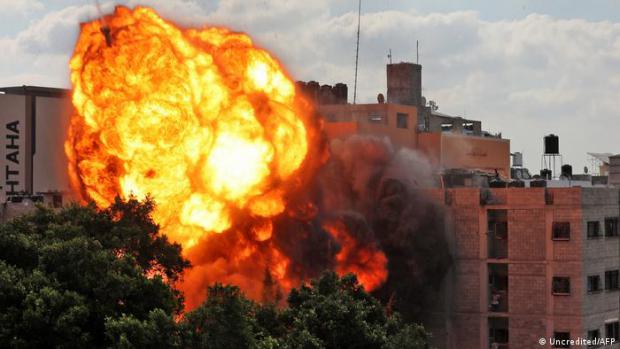 Coming off last month's eleven day Gaza war in which there were persistent fears that a 'northern front' would open against Israel if Hezbollah joined the fray (and after multiple missiles launched from southern Lebanon reportedly by Palestinian factions in the country), Israel's Defense Minister Benny Gantz has warned that the next potential war in Lebanon will see "overwhelming force" used.

The words were given at a ceremony marking Israel's official recognition of the army's 18-year occupation of southern Lebanon, which is now considered an official military campaign. Referencing the devastating latest strikes on Gaza, which killed almost 250 Palestinians - many of them children - Gantz said the campaign was "only the tip of the iceberg" in terms of military capabilities and what Lebanon's Hezbollah would face next.

"Whoever hides weapons in their house endangers their children," the defense minister added, in an apparent acknowledgement of the high civilian death toll especially impacting children.

Despite continued high tensions and a state of standoff between Palestinians and Jewish settlers in Jerusalem, particularly over evictions in the Sheikh Jarrah neighborhood, an uneasy Hamas-Israel truce has held since May 21.

In response to these latest threats out of Israel, Iranian state media quoted a senior Hezbollah representative who vowed that any aggressors would be met with the "fire of hell" in the instance of an invasion or attack.

"They (Israelis) should not err in their calculations again," the official, identified as Hassan Baghdadi said. "If there is a war with Hezbollah, they will see the fire of hell as they have never imagined."