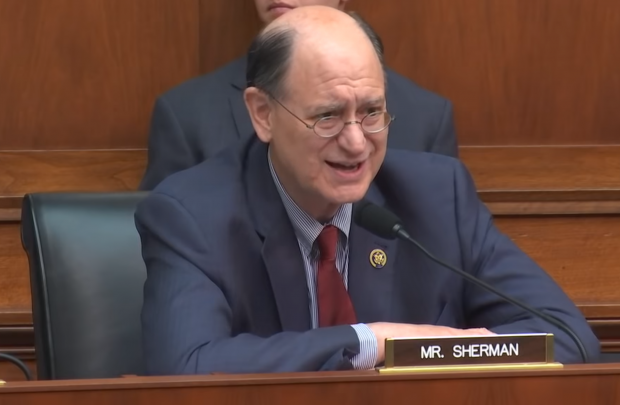 Guess how much money the American Bankers Association gave him?

Millions of Americans have bought into forms of digital, decentralized money known as cryptocurrency, valuing its privacy and independence from government meddling. Naturally, politicians in Washington want to rain on the parade and shut down the newfangled currencies— like Bitcoin and Ethereum—that are beyond their control.

One of the biggest opponents of cryptocurrency in Washington is Congressman Brad Sherman, a California Democrat who has in the past called for cryptos to be banned. At a Wednesday hearing for the House Committee on Financial Services, Sherman harshly criticized cryptocurrency and renewed his calls for its prohibition.

"Cryptocurrency is something you can bet on, but if people want to have the animal spirits to take risks, I'd prefer them to invest in equity markets to support the building of American companies, or the California lottery, to support the schools in my state," Sherman said. "Cryptocurrencies are highly volatile, so if one person makes a million dollars… and nine lose $100,000, Coinbase makes money, the millionaire goes on TV and says how wonderful it is, and nine others do not retire in dignity."

The congressman also claimed that "evading the know-your-customer-rule is the one thing cryptocurrencies have as an advantage to the US dollar."

"Cryptocurrencies have the political support of the 'patriotic' anarchists who are rooting for tax evasion," Sherman concluded. "I hope we shut it down." (Emphasis added).

The California congressman gets so much wrong here that it's difficult to know where to begin.