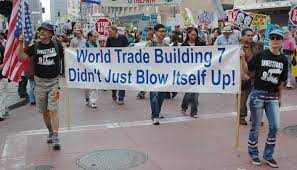 De-Coding the Propaganda and Censorship from the Perpetrators of the Controlled Demolitions of World Trade Center Towers #1, #2 and # 7 on 9/11/01

The monologue below is my representation of what is the real attitude of the guilty parties from the Project for the New American Century (PNAC) and others (especially PNAC's political sycophants, war-profiteers, oath-taking militarists and the corporate-controlled media. These four groups comprise the infamous military/industrial/congressional/media complex) who were either orchestrators of the controlled demolitions of the three World Trade Center buildings, part of the massive cover-up of the truths about what really happened on 9/11/01 or helped suppress proper, unbiased investigations that would have brought ALL the truths to the light of day. Here is what I think the leader of the guilty parties would say (imagine that someone like Dick Cheney or Donald Rumsfeld is speaking these words):

"You 9/11 conspiracy theorists have no real power, so go suck it. You are in a minority and you don't have the obedient mass media telling and endlessly re-telling the Big Lie day after day. 24/7 media blitz's like the press so willingly broadcast starting on 9/12/01 can't be overcome. Look at what our spiritual predecessors like Joseph Goebbels, Hitler's Minister of Propaganda and Public Enlightenment, did in Germany. Telling the Big Lie 24/7 got the vast majority of Gullible Good Germans to believe that leftists, trade unionists, antiwar activists, socialists, communists and Jews were to be silenced, censored, black-listed, imprisoned and then exterminated if necessary."

So Much For Fixing Supply Chains: