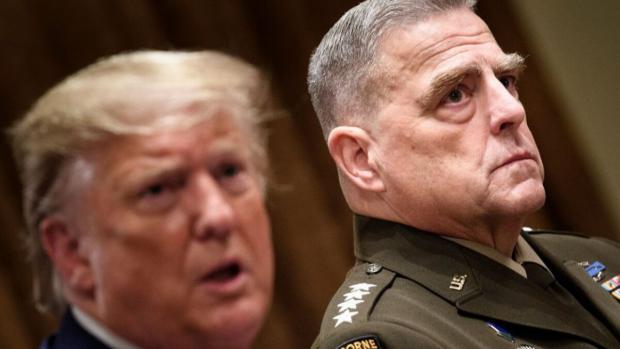 Update (1906ET): President Trump has responded to claims that Milley had a back-channel with his Chinese counterparts and would warn them of any impending attacks.

"If the story of "Dumbass" General Mark Milley...is true, then I assume he would be tried for TREASON in that he would have been dealing with his Chinese counterpart behind the President's back and telling China that he would be giving them notification "of an attack."" wrote Trump in a statement.

That said, Trump also said that "The good news is that the story is Fake News concocted by a weak and ineffective General together with two authors who I refused to give an interview to because they write fiction, not fact. Actions should be taken immediately against Milley, and better generals in our Military, of which we have many, should get involved so that another Afghanistan disaster never happens again."

"For the record, I never even thought of attacking China - and China knows that," Trump continued.

Joint Chiefs Chairman Mark Milley - who just facilitated the transfer of billions of dollars of US military hardware to America's enemies during the botched Afghanistan pullout - engaged in a 'top-secret' mission to undermine President Trump's ability to order military strikes or launch nuclear weapons following the Jan.6 Capitol riot, according to a new book by Bob Woodword and the Washington Post's Robert Costa.