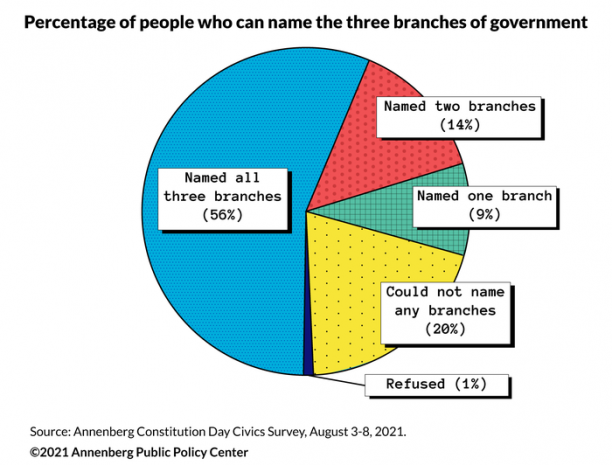 The center's annual poll of more than 1,000 people finds 56 percent of Americans are now capable of naming all three branches of government. In 2006, just 33 percent of respondents could accurately say the three branches include the executive, legislative, and judicial.

Moreover, following a divisive impeachment trial, contentious election, multiple court battles, and deadly riot at the Capitol, Americans have come out of the last year with a great understanding of the First Amendment of the U.S. Constitution. Three-quarters of the poll (74%) correctly stated that the First Amendment protects the freedom of speech. However, fewer respondents knew it also protects the freedom of religion (56%), freedom of the press (50%), the right to assembly (30%), or the right to petition (20%).

"Higher proportions of the public have a foundational awareness of the three branches and the protections in the First Amendment," says Kathleen Hall Jamieson, director of the Annenberg Public Policy Center in a media release. "But this knowledge appears to have been purchased at a real cost. It was a contentious year in which the branches of government were stress-tested."