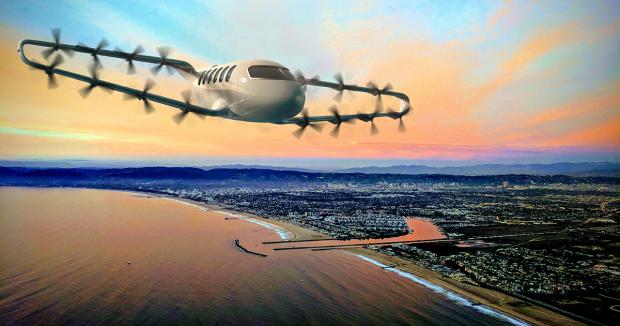 GKN Aerospace and Kelekona, for example, are working to get 30 to 50-seat monsters into the skies, taking more of a mass transit approach.

California's Craft Aerospace is shooting for something in the middle: nine-seaters, with a focus on inter-city regional flights. And it's doing so with a VTOL propulsion system the likes of which we've never seen before.

The main fuselage of Craft's aircraft looks a lot like a small traditional airliner. But things start getting weird when you get to the wings. The front wing joins to the bottom of the cabin, sweeping back at a fairly familiar angle. At their tips, though, the wings curve upwards to meet the rear wings, which are joined to the top of the rear of the cabin. Thus is formed a kind of box wing, with a diamond shape when viewed from above or below.

The surprises don't stop there. VTOL aircraft need to be able to point thrust down as well as backward in order to give them hover and cruise capabilities. Many designs, like the Beta Alia, simply throw a different system on for each of these use cases – these are called lift and cruise designs. Others tilt their propulsion systems as needed; we call these vectored thrust designs – examples would include the Joby S4 and Lilium Jet. There are tilt wings, which rotate the whole wing to vector thrust, like what Dufour Aerospace is making. There are also all kinds of hybrids in between. For example, the Archer Maker, Wisk Cora and Vertical Aerospace VA-1X, which are effectively lift and cruise designs with some tilting props, as well as other completely unique systems like the Pterodynamics Transwing.