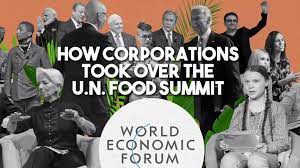 The United Nations held its Food Systems Summit in New York on Thursday. Under the guise of the U.N. system, and despite sleight-of-hand language about "equal opportunities," this summit represents a hostile takeover of world governance by corporate forces and the billionaire elite.

Today, social movements are standing up for democracy and against big capital's devastation of their lands, farms, and communities.

The United Nations is based on the idea of multilateralism, where states seek peaceful solutions on the basis of equality and respect, replacing the colonialist institutions that preceded it.

That's why for decades, the United States government has instead pushed for things like G-7, NATO, and other forms of control over geopolitics.

As far-right governments have pulled back from multilateral institutions like the U.N. and the WHO, corporate actors have been moving in.

Biden to meet with pope, push for global minimum tax at G20 in Rome

500 scientists tell UN there is no climate emergency.