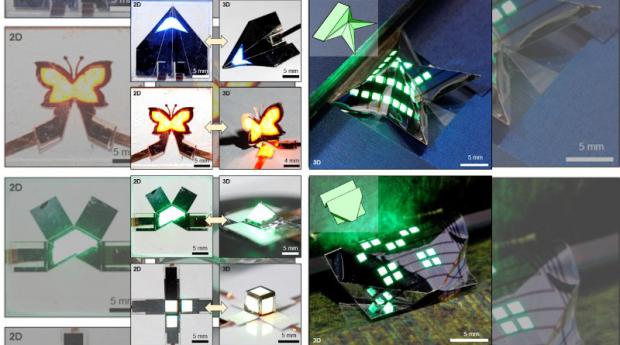 IBS researchers reported three-dimensional foldable QLEDs, which can be freely transformed into various user-customized 3D structures, such as butterflies, airplanes, and pyramids. Considering the rising popularity of foldable smartphones, the advancement of foldable display technology is gaining greater importance. It is expected this technology can provide unprecedented opportunities for next-generation electronics with user-customized form factors with complex structures, as well as allowing for dynamic three-dimensional display of visual information.

They used a power-controllable carbon dioxide pulsed laser and the silver-aluminum alloy-based etch-stop layers, the etching depth can be precisely controlled. As the laser-etched part of the device is relatively thinner than the surrounding region, it is possible to etch out deformation lines along which the device can be folded like origami paper.

Abstract
Flexible light-emitting devices that can transform from two-dimensional to three-dimensional (3D) forms could be of use in the development of next-generation displays. Various approaches for converting two-dimensional structures into 3D architectures have been explored, including origami methods that rely on folding along lines in which a structure has been thinned. But the fabrication of foldable 3D light-emitting devices remains challenging due, in particular, to the lack of a practical method for patterning the folding lines. Here we show that 3D foldable quantum dot light-emitting diodes (QLEDs) can be created using laser patterning and metal etch-stop layers with customized ablation thresholds. The approach allows etching to be limited to selected layers of the multilayered QLEDs, and it can be precisely tuned by using alloy-type etch-stop layers. The approach can be used to create QLED architectures with extremely small bending radii (0.047 mm), and we illustrate its capabilities by fabricating a 3D foldable passive matrix array of QLEDs that can display letters and numbers.